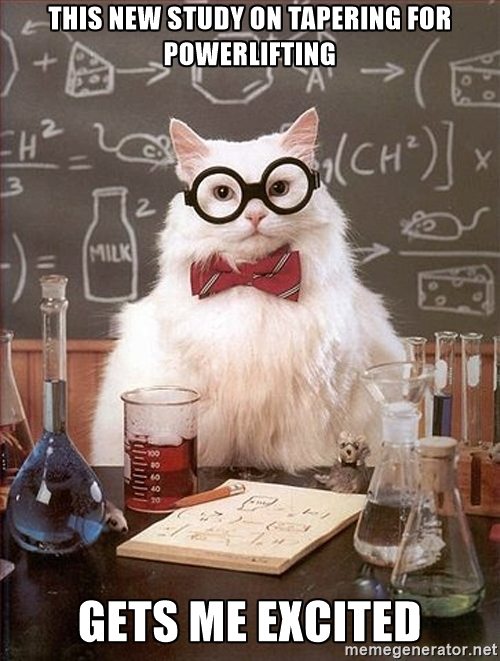 Are you guys ready to geek out a little bit? A research paper titled “Tapering Practices of New Zealand’s Elite Raw Powerlifters” was just published in the Journal of Strength and Conditioning Research. Seeing that the rest of the team and I have done powerlifting meets in the past and that the barbell lifts are such an important part of our training here at Halevy Life, I couldn’t help but look into the paper a little further.  It investigated the ways that these powerlifters tapered their training in order to be 100% ready in competition after a hard training cycle meant to improve performance. Here’s the abstract, which summarizes their findings better than I could:

“Pritchard, HJ, Tod, DA, Barnes, MJ, Keogh, JW, and McGuigan, MR. Tapering practices of New Zealand’s elite raw powerlifters. J Strength Cond Res 30(7): 1796–1804, 2016—The major aim of this study was to determine tapering strategies of elite powerlifters. Eleven New Zealand powerlifters (28.4 ± 7.0 years, best Wilks score of 431.9 ± 43.9 points) classified as elite were interviewed, using semistructured interviews, about their tapering strategies. Interviews were transcribed verbatim and content analyzed. Total training volume peaked 5.2 ± 1.7 weeks from competition while average training intensity (of 1 repetition maximum) peaked 1.9 ± 0.8 weeks from competition. During tapering, volume was reduced by 58.9 ± 8.4% while intensity was maintained (or slightly reduced) and the final weight training session was performed 3.7 ± 1.6 days out from competition. Participants generally stated that tapering was performed to achieve full recovery; that accessory work was removed around 2 weeks out from competition; and deadlifting takes longer to recover from than other lifts. Typically participants stated that trial and error, and changes based on “feel” were the sources of tapering strategies; equipment used and movements performed during tapering are the same as in competition; nutrition was manipulated during the taper (for weight cutting or performance aims); and poor tapering occurred when too long (1 week or more) was taken off training. These results suggest that athletes may benefit from continuing to strength train before important events with reduced volume and maintained intensity. Only exercises that directly assist sports performance should remain in the strength program during tapering, to assist with reductions in fatigue while maintaining/improving strength expression and performance.”

I’ve bolded important points from the abstract that I’ll be circling back to soon. Here’s a timeline from the paper that has a few more details and nicely illustrates how this all works out.

Last point of emphasis I want to make comes from the chart below. 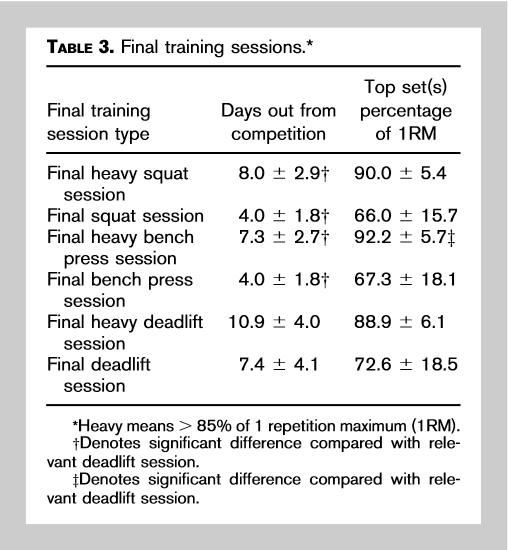 This basically shows that the lifters trained the deadlift further from competition than they did their squat and bench press, both from the standpoint of when they trained heavy and when they last lifted before competition. Without oversimplifying too much, it looks like these “heavy” training sessions were done with 85-95% intensity and the last training sessions before competition with around 70% intensity, although the higher standard deviations in the latter indicate that this intensity varied widely. This isn’t surprising, given that the lifters probably completed these lifts based on feel, in order to prepare for competition and not to elicit a training stress that could hinder performance. In fact, the research had a qualitative component that validated this; it found that feel was one of the main information sources that influenced the lifters’ tapering strategies, and it’s entirely subjective.

The qualitative component of this research also reveals some other tidbits as well:

The key takeaways from all this? The taper during the final weeks leading up to the competition should be focused almost entirely on recovery and technique. And as a whole, the training cycle progresses from general to specific.

None of this should be surprising, but it’s nice to get confirmation from the very best. You have to be good at a lot of things before you can be great at fewer things. This means it’s important to have a general strength base first, as evident from all the assistance work that is done at the beginning of the cycle and then slowly eliminated week by week in favor of specificity to the 3 lifts.

I competed in a powerlifting meet last year, and wrote about my experience here (How to Crush Your First Powerlifting Meet). The three big lessons I took away from that experience are only reiterated by the conclusions of this study and our discussion today in this blog: 1) the basics work best, 2) pushing yourself requires getting out of your comfort zone, and 3) recovery is important,

I was also curious as to how my training program compared with the results of this study, so I decided to dig out my old training log to find out, particularly with regards to volume and intensity.

In a nutshell, I spent 9 weeks seriously preparing for the meet, and they matched up pretty well with the “average” strategy for these NZ powerlifters. Volume was greatest in the beginning, especially for the bench, which I was terrible at. In my case, chest-supported rows, close-grip bench presses, push presses, block pulls, Bulgarian split-squats, front squats, farmer’s walks, etc all had their place during my meet preparation, but were slowly eliminated as the date neared.

Beginning of taper (significant decrease in volume and intensity): 1.57 weeks out

For the most part, these details match up pretty well with the timeline shown in the article, save for a few differences to note. I eliminated my squat accessory work very early on, and just focused on manipulating volume and intensity. I was most comfortable with squatting, so I don’t think I needed much else to train it. Compare that to accessory exercises for the bench, which I did almost until the very end of the program. Finally, as the meet neared, I decided that just practicing all 3 lifts in a single session at a very low intensity to groove movement would be sufficient without hindering my recovery and preparation for the meet, hence the results there.

Is it any surprise that these details match up with the tapering strategies of elite powerlifters? It shouldn’t be. The programming here is straightforward because the goal is simple: lift as much weight as possible. And how do we do that? Train heavy and for strength, and then rest up for competition. The squat, bench, and deadlift are, for the most part, simple up-down movements that don’t rely on absolutely flawless technical components to be completed successfully (unlike the Olympic lifts). Thus, the programming for powerlifting can be less complex than for weightlifting, and that is why the basics work best here. As we’ve touched on before, you can still get brutally strong and good-looking this way.

If nothing else, I hope this blog serves as a reminder to keep things simple and sensible. Happy training! 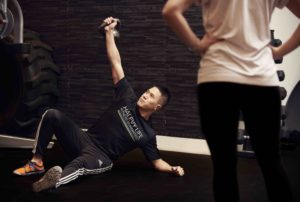 Jeremy Lau is a Staff Coach at Halevy Life.