This past weekend, we had the distinct honor of hosting physical therapist and industry up-and-comer, Dr. Quinn Henoch, for the first ever ClinicalAthlete Weightlifting Coach (CWC) certification. Roughly 40 clinicians, coaches, and trainers flocked to Halevy Life to learn about weightlifting from Quinn himself. By all accounts, the experience this weekend was better than we could have imagined.

There are a multitude of weightlifting seminars and certifications out there, but the biggest thing that sets CWC apart from the pack is Quinn’s clinical approach to the sport, which embodies the spirit of ClinicalAthlete. When it comes to the snatch and clean & jerk, everyone who does them wants to haul ass and add more weight to the bar. However, not many people would devote the time and attention it would take to do this safely and effectively. Some might not even know where to start.

As we’ve spoken about before here (Is Olympic Weightlifting right for you?), performing the lifts requires the proper balance of mobility, stability, and motor control. Otherwise, people run the risk of getting hurt when it’s time to load up the bar. An example of this can be found in a blog that Quinn wrote for Dean Somerset not too long ago: Shoulder Position for the Overhead Squat. It’s definitely worth a read. A compromised shoulder position, in which the torso leans too far forward but the barbell has to stay in line with the head, not only looks precarious, but could predispose a lifter to something like a labral tear when performing the snatch. 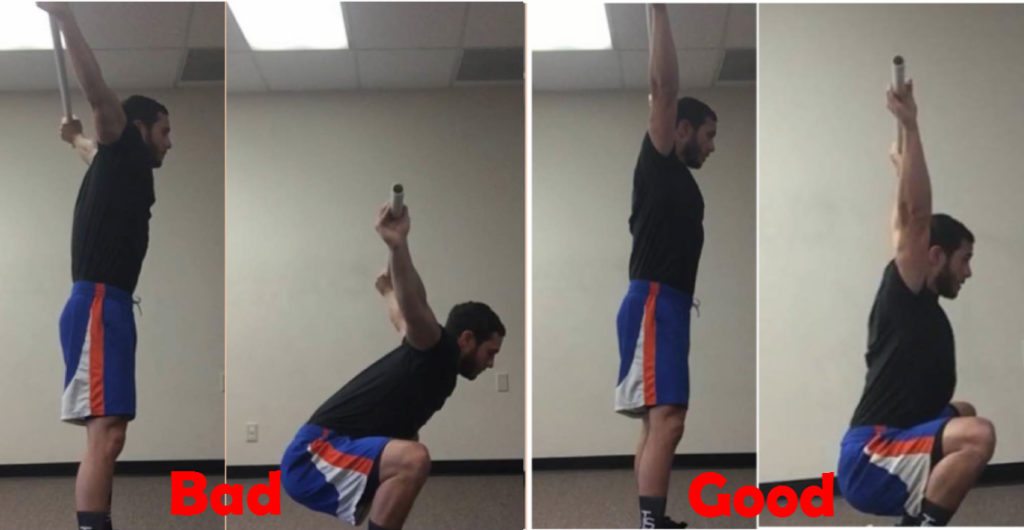 Can you see why the overhead squat on the left is more dangerous? Courtesy of Dr. Quinn Henoch

In a nutshell, one could say that the CWC was all about how to achieve the mobility, stability, and motor control necessary to succeed in weightlifting. In this sense, we really went down the rabbit hole. But there’s more to this topic at hand than just simply stretching until you’re blue in the face. It’s about owning positions and controlling the end ranges required for the lifts.

My fellow coaches and I thoroughly enjoyed the certification, and some of what we learned has already made its way into our coaching. The biggest lesson from the weekend, which I won’t be able to emphasize enough, is this:

Positions matter. Own them.

They matter, and they matter a lot. This is perhaps the most important point that Quinn drilled into us over the weekend. It does a lifter no good to learn the clean & jerk without learning how to get into and tolerate the bottom of a catch position, or the power position above mid-thigh. I could go on and on with these examples, but the point remains the same. 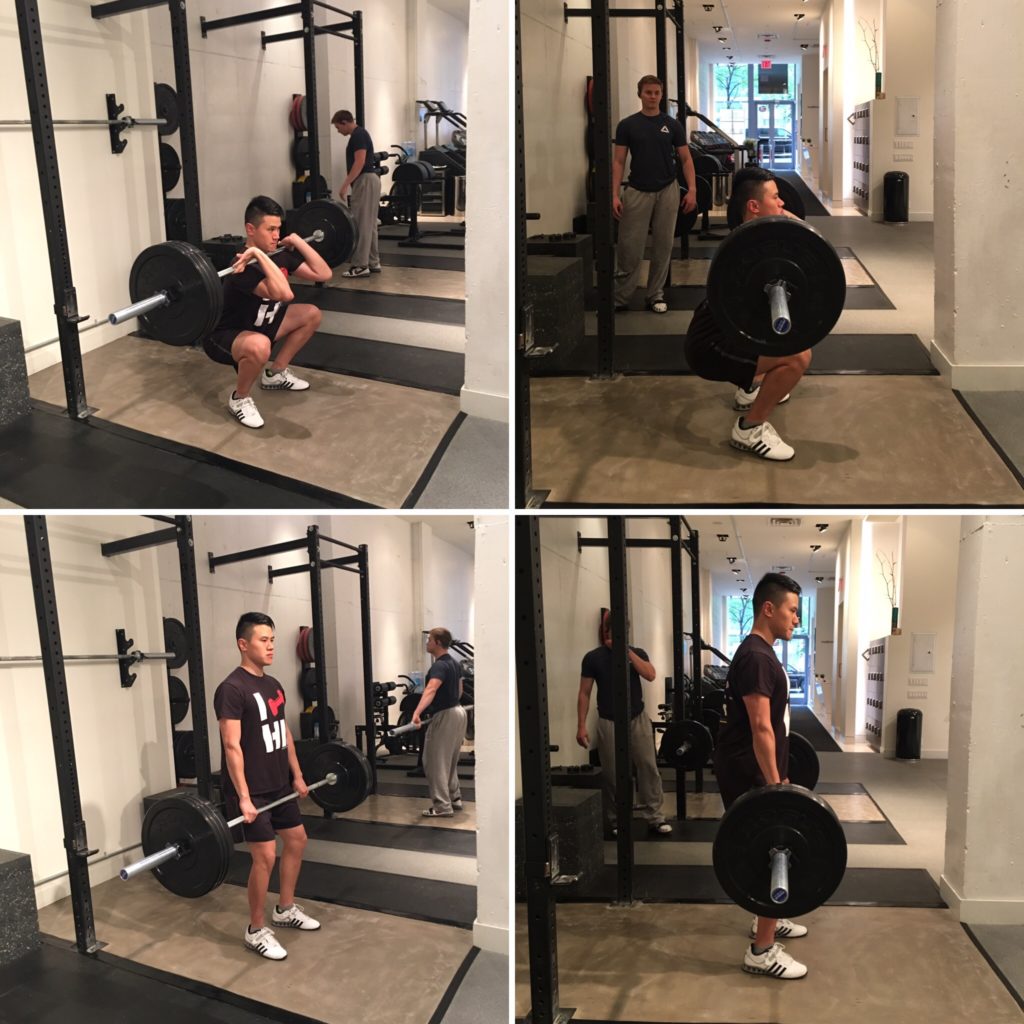 Top 2: The bottom of a catch position required for a clean. Bottom 2: The power position of a clean just before hip extension.

Let’s take a second to envision a scenario in which the above weightlifter is required to perform cleans at a high threshold. If someone is uncomfortable or unfamiliar with certain positions, the body will instinctively work to avoid them, especially under speed and load. If the lifter can’t tolerate the bottom of a catch position, he is likely to catch the bar high or miss the clean entirely because he can’t get down low or fast enough to receive the bar. If he is unfamiliar with the power position, he is likely to initiate the second pull too early. This could limit the amount of hip extension he’ll be able to impart onto the bar, or result in an inefficient bar path because the thighs bump the bar forward and out. Figuratively speaking, in all these instances the lifter would be leaving weight on the platform. That’s a fancy way of saying that he could be cleaning a lot more, if only he were proficient with these positions in the first place!

Familiarity with positions, body awareness, proprioception, or whatever you want to call it, also means that there should be a “buffer zone” in a lifter’s range of motion. In this buffer zone, he is still able to safely and effectively perform the lifts even when given different weights, situations, and constraints. Perhaps he caught a snatch just a little more out in front than he’s used to, forcing him to stabilize his weight a little more anteriorly in order to complete the lift. From the perspective of movement, although they are similar in their core mechanics, no two lift attempts are exactly the same. Thus, owning and controlling positions involves a lot of you know what—practice and repetition. This is necessary to gain familiarity with the subtle changes in position that naturally occur during lifting, but are still within a lifter’s tolerable range.

Ownership also involves the ability to maintain a neutral spine throughout the weightlifting movements, even while the rest of the body is moving up, down, and around with the moving barbell. Neutral spine allows us to properly stabilize our core, which enhances the stability aspect of the mobility-stability-motor-control equation. Unfortunately, it is all too easy for someone to sacrifice this protective stability and compensate for a lack of overhead or hip mobility by flexing or extending the lumbar spine.

So how do we stabilize the spine and gain the requisite mobility we need for weightlifting? It’s as simple as learning how to breathe in these positions. In fact, it’s exactly like the breathing with intent we taught in this article. In through the nose, and out through the mouth, while actively keeping the ribs down. This necessitates stabilizing the core, but it also allows you to relax into new, deeper positions as the set progresses.

In the video above, you can see and hear Jake move into a deeper squat with every breath. He also uses the same strategy to mobilize his thoracic spine to achieve a better front rack position. Pretty powerful stuff!

Even so, I’m still barely scratching the surface on how to attain the requisite mobility, stability, and motor control to get into and own the positions necessary for the Olympic lifts. On this note, another point of emphasis that was made during CWC was that position matters more than programming. The best training program for weightlifting would be for naught if positions aren’t attainable. Trying to perform the lifts without adequate ability to get into proper positions would be like trying to jam a round peg into a square hole. It just won’t work.

What you’ll find is that positions and your ability to get into them will dictate your corrective strategy. You want to make the most of your time in the gym. If you struggle with your squat, whether because of your ankles, hips, or bar positioning, it makes way more sense to focus on those squat issues than other aspects of the lifts in your corrective strategy.

In conclusion, slow things down and get in touch with your positioning for the Olympic lifts. Once you’ve done so, you can go back to making progress and dominating on the platform.

If you missed out on the first CWC certification, stay tuned, because Quinn will be taking the show on the road. Right now, he’s booked for CWC through January 2017: @juggernauttraining in July, @kabukistrengthlab in September, @yorkbarbell in October, @crossfitcityplace in November, and @onnitacademy in January. That’s 5 different states, and 5 chances to become more awesome. For more information and to sign up, be sure to visit cwcseminar.com.

It was a pleasure to host CWC and we can’t recommend it highly enough!