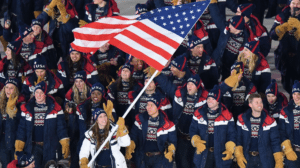 Halfway across the world, the 2018 Olympic Games in Pyeongchang have already begun. Unless you were part of the dedicated few who were up early to watch the opening ceremony, you’ll be catching up on all the action and festivities tonight.

For almost all of the athletes who will be marching in the ceremony for all their respective countries, this IS their Olympic Games. Many athletes will be eliminated from medal contention in the coming days. The majority of athletes who participate will not medal and will leave the Games empty-handed.

Olympic glory will slip through their hands. One mistake could be the difference between gold and silver, silver and bronze, or bronze and fourth-place. These athletes won’t make a living competing in the Games once in their lifetime or once every four years.

And yet, here these athletes are. Whether it’s hockey, skating, or skiing among others, they are the best athletes in their sport of choice; but failure is still the most common result.

If I told you to do something for which you would have to devote your entire life for, practice for at the crack of dawn and well after sundown, leave your friends and family for extended periods of time to train, and that even if you were among the best of the best, the most common outcome was still failure and leaving empty-handed, would you do it?

Where’s the glory in that?

Yet, I highly doubt that this difficult journey is one that Olympic athletes regret. Olympic glory, though elusive, is a labor of love. It’s a pursuit that takes incredible determination. For many of these passionate athletes, the chase for success is worth the long journey not because of the false promise of a medal, but because they truly love their sport of choice.

Oftentimes in life, we get enamored with results and glory. We lose sight of the process it took to get there. But the sacrifices and the journey are what really make Olympic athletes elite.

We can learn a lot from them. In your workouts and your training, don’t fret over the end-result and the destination. Stay humble, and embrace the sacrifices and process it would take to get there.